Winners selected based on performance, growth and representing company’s core values during the 2017 fiscal year

AUSTELL, Ga. (June 7, 2018) – YKK AP America recognized its top performers of 2017 during its annual meeting at Atlanta Evergreen Marriott Conference Resort at Stone Mountain, Ga. The recipients were selected based on performance and growth during the 2017 fiscal year, as well as embodying the company’s core values.

Honorees included the Orlando branch who received the coveted Branch of the Year Award and architectural sales representative, John Spelman, who was awarded the company’s most prestigious individual honor, the President’s Award. The Branch of the Year Award recognizes outstanding achievements in sales, profitability, operations and customer service excellence. Barry Wampler, who manages the Orlando team, accepted the award on behalf of the branch.

Spelman, also a member of the Orlando team, was humbled to take home the President’s Award, which recognizes the company’s highest performing sales representative.

“The people that make up the Orlando branch and YKK AP’s entire team are truly incredible,” said Spelman. “So to be selected from this talented group and recognized with the President’s Award was a proud and humbling milestone in my career.” 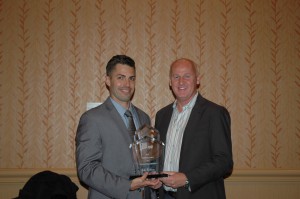 Wampler also received the fourth annual YKK AP Core Values Award, which is given to a sales team member who consistently brings YKK AP’s Core Values of creating opportunities, insisting on quality, and building trust, transparency and respect to life through daily practice.

“The annual meeting is an opportunity to recognize and celebrate the hard work and contributions of everyone on our sales team,” said Mike Turner, senior vice president of sales and marketing at YKK AP America Inc. “It was an honor to bestow these awards on the many dedicated members of our team who are incredibly deserving of this recognition.”

YKK AP America Inc. is a technology-oriented manufacturer of commercial façade systems and residential doors and windows.  With every finished good, we push the boundaries in next generation manufacturing and create value for architectural applications.  Driven by a desire to provide exceptional service in our markets, YKK AP America builds upon our foundation of advanced engineering, vertically integrated manufacturing, and customer focus to deliver the highest level of quality at a competitive price.  Headquartered in Austell, Ga., all building products are manufactured in our world-class production facilities located in Dublin, GA. and Macon, GA. YKK AP America Inc. is a subsidiary of YKK Corporation of America, whose parent company is global manufacturer YKK Corporation of Japan. For more information, visit ykkap.com and follow us on Linkedin.com.

View All
Need Specs? Go to the technical product guide